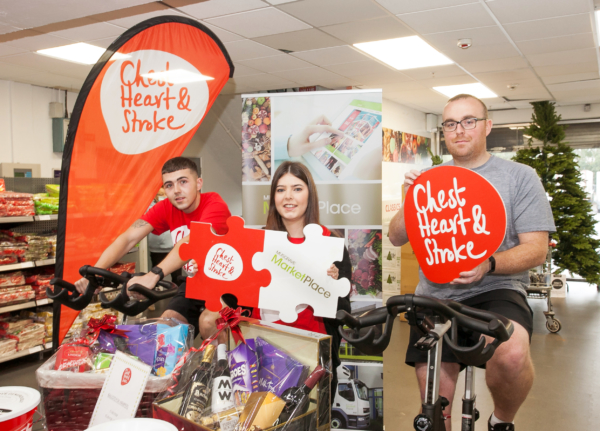 Musgrave MarketPlace stores in Belfast and Derry~Londonderry recently completed indoor static cycles as part of the ‘Musgrave Triathlon that’s not a Triathlon’ event, which saw staff attempt to accrue the distance of a triathlon during the month of September. Musgrave MarketPlace is a division of Musgrave NI, a long-term supporter of Northern Ireland Chest Heart & Stroke (NICHS), and the stores took on the challenge to raise much needed funds for the health charity.

Over the last two days of September, staff at Musgrave MarketPlace racked up the miles during the static cycles and raised a fantastic £1789. This will be added to the £270,000 raised to date by the retailer alongside MACE, another brand in the Musgrave NI family. This extraordinary amount has ensured that NICHS can continue to support over 3,000 chest, heart and stroke survivors across Northern Ireland each year.

Stacey Smyth HR Business Partner at Musgrave MarketPlace, says; “Musgrave MarketPlace were delighted to host the recent indoor static cycles in support of Northern Ireland Chest Heart & Stroke. We have a great partnership with the charity and this was yet another example of how our staff are willing to go the extra mile to help people in our local communities. Everyone really enjoyed taking part and they are looking forward to the next challenge!”

Jackie Trainor, Director of Income Generation at NICHS, adds; “We are so grateful for the ongoing generosity of Musgrave NI who, over the years, have ensured that thousands of people affected by chest, heart or stroke related conditions have received the support and care that they deserve. It is important to remember that nearly 90% of NICHS’s research and care and prevention services are funded exclusively by donations, so fundraising efforts like this are vital to NICHS and the work we do.”

To find out more about ways to support Northern Ireland Chest Heart & Stroke, as a business or as an individual, visit https://nichs.org.uk/how-you-can-help