Undertones Drummer Listens To The Beat 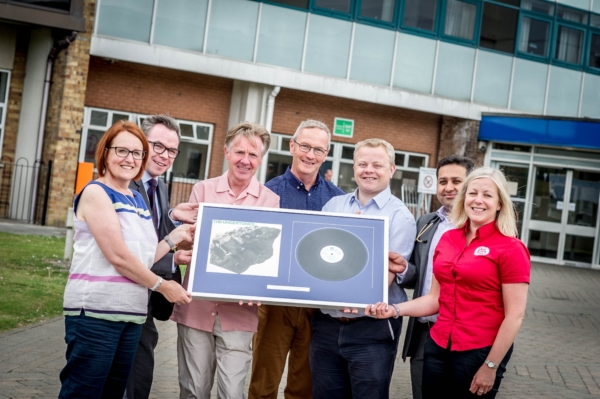 Billy Doherty, drummer with The Undertones, has spent years listening to the beat of the music. But since having a heart attack and stroke at the end of 2017, he now also pays attention to the beat of his heart and is joining local health charity Northern Ireland Chest Heart and Stroke in raising awareness of these illnesses.

Derry/Londonderry’s most successful band is playing at the Open House festival on Saturday 25th August in Bangor and are currently in rehearsals for a tour which had to be rescheduled when Billy fell ill just before Christmas last year. Unlike previous tours, this time Billy will be keeping an eye on his heart rate to ensure it is below the maximum his doctors recommend.

Billy recalls events leading up to his illness. “I’d been feeling tired for a few weeks, maybe months, beforehand, but I didn’t think anything of it. The Undertones had just finished a gig in Dublin when I suddenly had a pain in my arm and my throat felt sore. I thought nothing of it as I assumed the pain in my arm was just muscular from hours of drumming, and the sore throat was a cold coming on. However, the pain came back a number of times. In fact, it was so strong the next morning that it woke me up!”

Eventually Billy called his sister, Pauline, a retired nurse. Even though she told him to go to hospital immediately he waited until the next day to go to his GP who carried out an ECG and sent him immediately to Altnagelvin Hospital.

Billy continues, “I still didn’t really grasp what was happening. I didn’t really know the signs and symptoms of heart disease – I wish I had done – so I drove myself to hospital with a note from my GP in my pocket! I wouldn’t recommend this to anyone. I could have had a huge heart attack on the way there.”

The ECG and blood tests taken at Altnagelvin showed he was about to have a massive coronary so he was immediately taken to theatre and had two stents put in.

Billy says, “It was surreal. One minute I was at work and the next I was in an operating theatre. It was such a shock. My parents both had cardiovascular disease and suffered heart attacks and strokes, but I am a fit guy, not overweight, a non-smoker and I hardly drink. I had no idea this was creeping up on me.”

But that was not all for Billy. One week later, he had a stroke. “I was at home and suddenly had a pain in the top of my head. I looked at my phone and it seemed as if it was moving across the sofa. Something strange was happening. I phoned Pauline, then 999. By the time the paramedics arrived, my speech was very slurred and I had lost power in my arms.”

Billy has nothing but praise for the Ambulance Service and Altnagelvin Hospital. “So often,” he says, “our health services are criticised, but I had excellent treatment from the paramedics and the hospital. The consultant was very straight talking about what changes I need to make, especially to my diet and exercise regimes. I am finding the cardiac rehab very helpful.

“I was so impressed by the treatment I received that I got presentation copies of the The Undertones LP made for the different departments in the hospital who helped me so much.”

Physically, Billy says, he has made an excellent recovery. However, mentally, it has been much more difficult. “It has floored me,” he admits. “I have very few physical effects, though I have made changes to my diet and exercise and it has been difficult to get used to the medication. But the shock has been tremendous and I have had to learn how to cope emotionally.”

Billy has one final message, especially to the many fans of The Undertones across Northern Ireland. “We are all reaching the age where we cannot assume we will be in good health forever. I have had a wake-up call and I want to use my experience to warn others not to ignore what their body is telling them. Go to your GP if you think something is wrong. These illnesses don’t just come on overnight but if you don’t watch out for the signs, they could end up killing you.

“After my heart attack and stroke, I contacted NICHS as the leading local charity fighting these illnesses. I want to join forces with them in warning people about the signs and symptoms and I would really recommend having a regular health check with your GP or with NICHS.”

If you have been affected by chest, heart or stroke illness, you can find out more about how NICHS can help at www.nichs.org.uk.