NICHS | Our Diet Through The Decades: How Have Our Eating Habits…
skip to main content

Our Diet Through The Decades: How Have Our Eating Habits Changed Since 1946?

On the 14th of June 1946, Northern Ireland Chest Heart and Stroke was founded by sixteen volunteers. As we celebrate our 75th anniversary year, we’re reflecting on how many things about the way we live have changed – not least the contents of our kitchens.

Our dinner tables today look very different to how they did in the 1940s. But are our diets today really any better than generations past?

Here, we take a look at how our diets and lifestyles have changed since 1940. 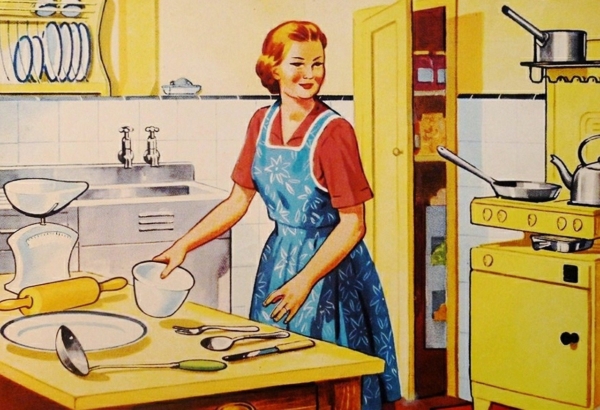 In the 1940s, the Second World War was ongoing and food rationing was introduced. Meat, cheese, butter, cooking fats and sugar were heavily restricted, but potatoes, other root vegetables and bread were freely available. People ate a diet much higher in carbohydrates and lower in fats than we do today.

In the 1950s, people ate what was in season - there were no strawberries, fresh peas or salad in winter. No one would dream of having their main meal of the day without a cooked dessert like tapioca or sponge and custard. In 1954 there was rejoicing because wartime rationing finally ended. After rationing ended, people rushed to buy butter, sugar and white bread. Bananas and oranges which had virtually disappeared began to return to shops. Doing a food shop was actually much more expensive than today – food shopping took up one third of the average income, compared to around 16% today. 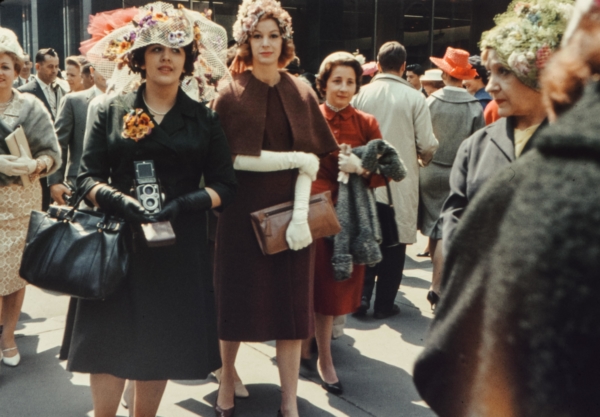 The National Food Survey, conducted since 1950, shows our consumption of fruit has slowly risen since the 1950s, but that consumption of bread, cereals, potatoes and other vegetables has steadily fallen. We eat fewer visible fats today, but consume hidden quantities in processed foods, takeaways and restaurant meals.

The 1960s were a decade of change. As people began to take overseas holidays, dishes like Spaghetti Bolognese began to find their way into the diet. The growth of Indian and Chinese communities meant Britain got its first taste of these cuisines. Fish and chips remained the most popular staple, however, and consumption of meat and sugar reached record levels. The white sliced loaf arrived as did sugar coated breakfast cereals. Tomatoes became available in winter for the first time. Frozen foods became a common sight in the shops.

The 1970s marked the start of a reduction in our intake of vegetables. The average person ate a pound of red meat each week, compared to just over half of that today. Fruit juice arrived in the shops but only one in ten people consumed it regularly. The white sliced loaf became even more popular in its new plastic wrapper (previously, all bread had been sold in waxed paper). Frozen food continued its onward march, and ready meals became popular. Supermarkets began their dominance of the food industry. This was also the last decade in which children could depend on a guaranteed hot meal in school, since local authorities were no longer required to make one available. At their peak in 1966, school canteen lunches were taken by seven out of ten pupils. 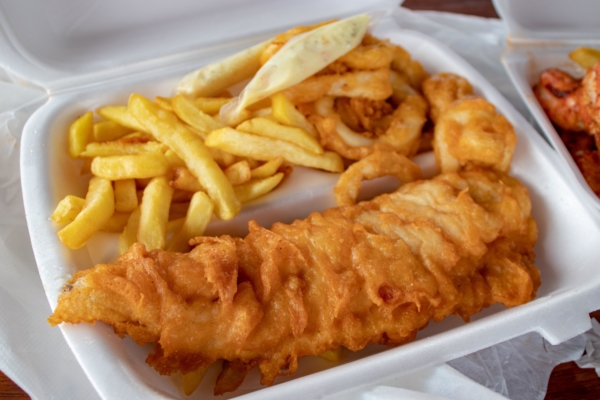 In the 1980s the increasing number of working women helped to change the face of food in the UK. Out went meat, potato and two veg; in came the microwave and meals based on pasta. This was also the decade in which takeaway hamburger began to eat its way into our culture. More people were living on their own, further fuelling the market for fast food. Milk was no longer something you always found in glass bottles. Now it started to come in waxed cardboard or plastic cartons.

In the 1990s, the big supermarkets completed their dominance of the food industry. The range of products became massive and included previously unknown salad leaves and exotic fruit and vegetables. The move towards faster food continued. In 1980, the average meal took one hour to prepare. By 1999, that had dropped to 20 minutes. Breakfast became a casualty of our speeded-up lifestyle. Cereal bars were introduced but many contained a high level of sugar. 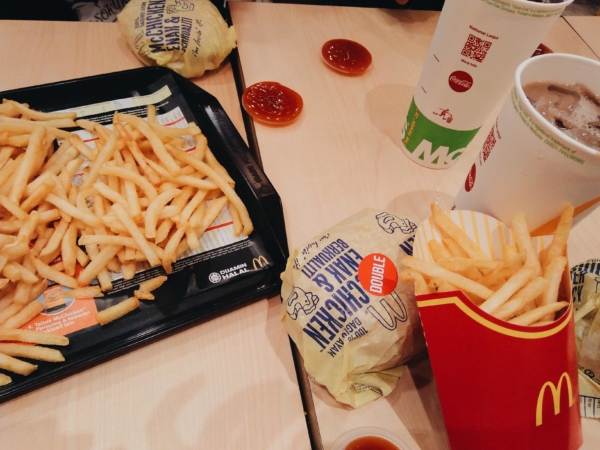 In the 2000s, the trends of the previous decades accelerated. Chicken Tikka Masala was declared Britain’s national restaurant dish in 2001. Other national cuisines, such as Thai, became more popular thanks to the efforts of supermarkets to bring us something new on a regular basis. Snacking continued to rise, while fruit and vegetable intake declined. However, the population soon began to become more aware of the issue of rising obesity rates and unhealthy lifestyles thanks to documentaries such as ‘Supersize Me’ which focused on the impact of living on McDonald’s meals and ‘Jamie’s School Dinners’ in which Jamie Oliver battled to make school meals healthier across the UK. Soon, foods high in fat and sugar such as Turkey Twizzlers, chips and donuts had disappeared from school canteens across the country and McDonald’s added salads to its menus.

In the 2010s, the rise of the smartphone had a huge impact not just on our social lives, but also on our eating and health habits. Fast food delivery became available literally at our fingertips, while online streaming services made spending hours on end on the sofa binging your favourite TV shows the norm. Meanwhile, plant-based diets increased in popularity due to concerns over climate change and sustainability. ‘Clean eating’ movements sprouted amongst fitness and health conscious communities of influencers online sparking a rise in popularity of protein powders, weight loss teas and juice cleanses. Ever more exotic and trendy ‘super foods’ became household staples across the country, such as avocadoes. 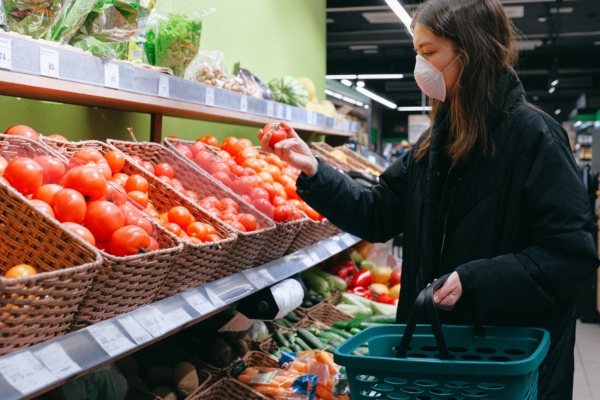 And as the 2020s unravel before us, the trend towards moving less, sitting more and unhealthy eating habits only seems to be on the rise. With the COVID-19 pandemic and lockdowns closing bars and restaurants, ordering fast food or cooking lavishly at home became one of the few remaining pleasures available for many people to enjoy. Paired with the closure of gyms and the rise of working from home, much of the population have become more sedentary than ever before, with it being estimated that the average person has gained half a stone of weight during the pandemic.

So, how have things changed in 75 years?

A lot of things have improved since the 1940s. While our intake of fat is much the same, we eat a lot more of the saturated kind. In the 1940s, olive oil was only available in chemists’ shops – now we use much more of it in cooking. Our consumption of red meat has declined. However, we are eating less fish (in the past, everyone ate fish on Fridays!).

We now have access to a whole range of foods our grandparents could only have dreamed of, and more knowledge and education available at our fingertips on how to eat healthily.

So why then is obesity and being overweight such a major problem? And why has greater choice of healthier foods not brought a huge decrease in cardiovascular disease?

The most obvious explanation is we are a lot less active than we were in the past. We walk a lot less and do less physical work. We snack more and consume a growing number of calories from sugary drinks, crisps and chocolate. We also eat a lot more processed foods, which are notoriously high in sugar and salt.

The good news is, health trends today are not all doom and gloom. Certainly in the modern day, our average life expectancy is much better than it was – in 1950, the average person was expected to live to 68, while today that has increased to 81. In addition, Coronary Heart Disease deaths have more than halved since the 1960s in the UK.

Our hope is that by continuing to work together with the people of Northern Ireland, we can keep improving the health of everyone here for the next 75 years!

Food Facts through the Decades