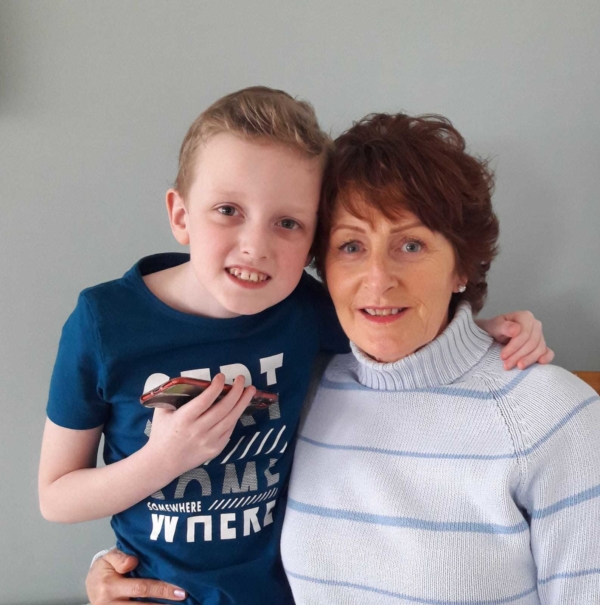 I had my stroke on 7th August 2020. You couldn’t have put your finger on it. I had been out on Thursday with my sister and we stopped for a cup of coffee. We were outside the shop because of COVID, I was talking to her and then all of a sudden no words came out. I didn’t think anything of it, but then when we were walking home, I took a numbness inside my mouth - as if it was around my teeth.

That was for a couple of seconds and then it went away. Then on Friday I was taking a shower and the numbness came back in my mouth. I was looking after my grandson and I had made him a cup of tea, and I dropped it. I couldn’t say that I had weakness in my arm, I just thought I was clumsy and I just dropped the cup.

But then I choked on a tiny piece of apple. My husband had to do backslaps and abdominal thrusts. Fortunately for me, the apple dislodged.

My 9 year old grandson saved my life that day last year – he was sitting beside me when I choked. My husband wasn’t in the kitchen and he went and got him.

He’s a bit traumatised, every time I cough he says, “nanny are you choking?”

I phoned the GP and they said that with all the coincidences, I should attend A&E so I did and I was admitted. They did an MRI scan and told me I had a Posterior circulatory stroke

But then on the Wednesday I had a CT angiogram which showed I had a completely blocked right carotid artery and a 90% blocked left carotid artery, so I was transferred to the Royal for surgery.

So not only had I overcome the stroke, I also had to overcome surgery.

Then Yvonne from NI Chest Heart and Stroke had got in touch with my husband while I was still in hospital. That’s how I got involved in NICHS’s services and the zoom sessions.

I found the Zoom sessions a great benefit for me because it gave me something to focus on and it showed me there were other people in the same position as I was in, all of different ages.

Before my stroke I played international hockey for Ireland, I played competitive tennis, I did the park run, I went to the gym 3 times a week - so my life was turned completely upside down. I’m on antidepressants and I’m a nurse - usually nurses would think ‘I can cope, I’m fine’ but that wasn’t the case and I just thought ‘I’m not fine’ and I’m going to take everything and all the help that everyone is giving me.

Those Zoom sessions on PREP and Taking Control were good because it gave you a focus. In Taking Control, we put did goal setting and put together an Action Plan. We got a booklet on coping with long term illness which I found very beneficial. And it actually even benefitted my husband as well because he’s just been diagnosed as diabetic.

We learned self-management tools - things like healthy eating, communicating, sleeping things and understanding your emotions. Physical activity was the main thing for me because I was always fit and active before, and then to be laid up doing nothing practically was tough. With goal setting mine were around exercise, so I was setting goals like going on the exercise bike for 10 minutes and doing that 3 times a week - and now I’m doing that every day. It’s still only 10 minutes a day, but I’m doing it.

When I started running 6 weeks ago, my sister and I went out to run together. I aimed to run for 30 seconds but she said, “30 seconds? Sure we’ll only be starting before we’re finished.” But she didn’t realise how this affected me – I could hardly breath by the end of the first 30 seconds, but now I can run a minute and be fine, so I’m gradually building it up.

That was the main benefit for me – realising that I CAN do it. It’s going to be long and it’s going to be slow, but at least it’s something that’s lifting my mood and making me realise, yes I’ve had a stroke but there are still things that I can do and I can adapt.

My long term goal is to be back playing tennis - not competitively, but to be hitting the ball over the net by the summertime. The courts are closed at the minute but hopefully that will progress.

There was also the emotional side and sleep and how to relax yourself and deep breathing exercises, do the body scan how to relax and bring you to a totally different place

When we started at the beginning I was in a totally different place. I thought I was going to end up dying like my mother. My mum had a stroke at 54 and then a brain haemorrhage at 71 and I had all the same symptoms as her. I thought that’s what’s going to happen to me. But just with talking with other people and being on the right medication, I realise the risk is still probably there, but as I put it, it’s like doing a risk assessment in work. It can happen, but the chances of it happening are rare. The NICHS team helped me that way too into a totally different frame of mind and helped me to not dwell on what I was before, but to start from scratch and say this is my life now and gradually build it up.

I am in a better place now than I was before I did the PREP and the Taking Control.