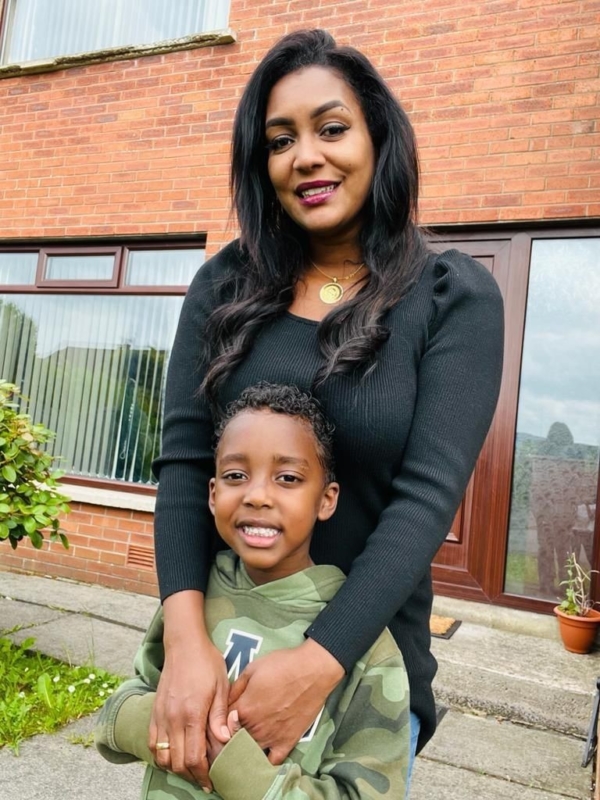 No parent of a child with asthma wants to think about their child suffering a potentially life-threatening asthma attack. However, local mum Hadil Ibrihim and her five-year-old son Mohamed, from Belfast, know all too well what this is like and how serious asthma can be.

While many of us might think of asthma as being a minor childhood condition that causes the odd cough or wheeze, the reality is that asthma attacks can kill.

Hadil and Mohamed are sharing their story to support local charity Northern Ireland Chest Heart and Stroke’s new asthma campaign to raise awareness of the condition, how dangerous it can be and the importance of the correct use of inhalers.

Hadil says, “Mohamed had always had chest problems. I remember the first time we were admitted to hospital, he was 4 months old and he had Bronchiolitis.”

“Ever since then it was chest problems, chest infections, one after the other. He would be in and out of hospital every month or two, spending a couple of nights every time because of his chest.”

“He was diagnosed with asthma shortly before he turned two. That was when the big one hit us. He had an asthma attack. He was coughing all night, he couldn’t sleep. It was so bad the inhalers weren’t helping him at all - it was like he was popping candy.”

“We took him to hospital and it turned out the carbon dioxide in his body was very, very high and he had to be admitted into the ICU. He was intubated, and they put him to sleep. Scary isn’t the word. I was nine months pregnant at the time and with the shock of it all, my blood pressure went through the roof and I went into labour right there in the hospital.”

Hadil recalls, “It was really bad. All these different doctors were telling me ‘let’s hope he pulls through.’ As a mother, let me say, that is really scary.”

Mohamed was discharged after a hospital stay, and as time as went on, Hadil has learned to live with his condition, thanks to Mohamed’s doctors and making sure to manage his asthma well day to day. Hadil explains, “It’s better now that I know how to deal with it. His doctors are great - they’ve given me so much help. When I don’t know or I’m not sure, all I have to do is call them and they get straight back to me.”

“The doctors have also made it so much fun to him that he has never been ashamed of his inhalers or his asthma. Even when he’s out with other kids, he isn’t afraid to say ‘I can’t run’ or ‘I need a break’. He understands his asthma and he’s very good at looking after himself. It was down to the doctors who help make him feel proud, like a champion and a hero for looking after his asthma!”

So what are the key steps for ensuring asthma is well managed? Hadil and Mohamed know them all too well. The first is inhalers – making sure you use your preventer inhaler every day and take your reliever inhaler everywhere.

Hadil says, “I have inhalers everywhere, nebulisers everywhere. In handbags, in the car, beside my bed – everywhere! I would not leave the house without one, even if Mohamed’s not with me, that’s how obsessed I am with having them. They really do save his life. He doesn’t mind taking them, and knows they make him feel better. He would even remind me in the morning sometimes – oh, mum, my inhaler!”

Having inhalers handy can be the difference between life and death, and Hadil and Mohamed must always be ready for an emergency. Hadil explains, “It literally takes him less than half an hour from when he feels unwell to when he’s really bad. I’ve had to put him in the car so many times and rush to hospital due to asthma attacks. The sooner you spot that they’re getting bad and take them to get help, the better.”

Another vital aspect is ensuring others are aware of Mohamed’s condition. “His doctors and I have trained him to always say when he needs his inhalers to any grown up, me or his teachers.”

Knowing the triggers for your asthma is another key factor in preventing asthma attacks. Hadil says, “You’ll never know every single trigger but you need to be aware and keep your house and environment the best you can for them. So many things trigger Mohamed. Everyone around me knows you can’t come near me or the family if you’ve been smoking or smell like smoke. It is a number one trigger. Dust, mould, and enclosed spaces are also an issue – rooms need to be well ventilated. It took us so long to find a house that was suitable for him.”

“In the winter time, the cold triggers him, and in the summer time it’s hay fever and grass and all of that. It affects close family and friends too, because if we are seeing them, there is no wearing perfume, and no bleach or air fresheners in the house if we are visiting.”

As a mum of three, Mohamed’s asthma has impacted the whole family. Hadil says, “Our whole life is changed. Not just mine, my close relatives around us too. He’s the middle child, so at first it was really hard for my older child. I had to miss birthdays, I had to miss Christmases, I had to miss so much because I was always in hospital with him.”

“There are so many things that we can’t do. To this day, I can’t take them all swimming because there’s probably a fifty percent chance of him getting sick the next day. We can’t travel very much. I am originally from Sudan and we used to travel back there every couple of years, but we haven’t been able to due to Mohamed’s illness. We have to make sure anywhere we go, he won’t be exposed to triggers and get ill.”

So what would Hadil say to other parents whose children have been diagnosed with asthma?

“They need to get educated about asthma. They need to find out about every little thing, they need to know what to expect and not overlook any of the slightest things. Take inhalers everywhere. Take your preventer inhaler everyday. It is really hard. Being in hospital for so many nights and seeing your child sick - it doesn’t get easier. But by being prepared, using your inhalers and taking them with you, and learning about it means you can prevent them being seriously ill and manage it the best you can for you and your child.”

For further information and support about asthma visit, www.nichs.org.uk/asthmacankill