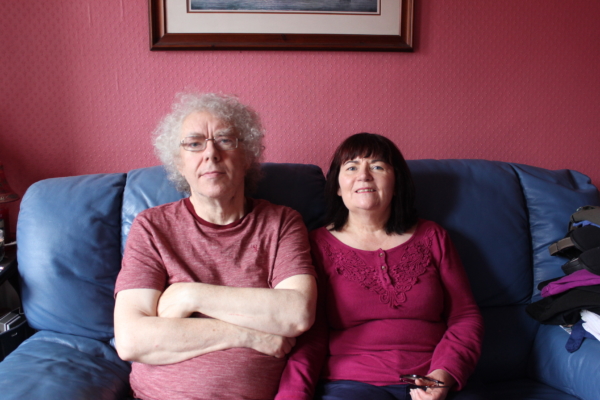 Jim Lilley felt lucky that he was able to walk out of the hospital after surviving two strokes in October 2015, and another almost two years later in May 2017. But while the impact of his strokes may not have been obvious straight away, he and his wife Roisin and their two daughters are still living each day with side effects which appeared much later.

“The tiredness is a big thing. I just don’t have the same energy that I used to,” Jim says. His speech was also badly affected, even more so following his third stroke in 2017. “I had to have intense speech therapy which helped a lot, but it can still be a bit slurred. It’s worse too if I’m tired, or busy and rushing around. While I walked straight out of the hospital, my balance was actually affected but it only became noticeable when I was walking on uneven ground months later.”

After Jim’s 3rd stroke, Shirley, a Stroke Family Support Co-ordinator got in touch. He embarked on our PREP and Taking Control Programmes, and now attends a Stroke Activity Group, while his wife Roisin joined our Carer’s Group.

“Back then, I felt like a fraud,” Roisin says, “I heard how badly affected some of the carers partners were. At that stage, Jim was doing really well.”

“It totally floored us.”

But then, in summer 2018, Jim was hit by a huge setback. “My left leg went,” Jim says, “It was so strange. It was just sitting there like a dead leg. I couldn’t move it so lost my ability to walk or drive, which I could do after my stroke but couldn’t after my leg went. I had no energy and was exhausted very often.” The doctors were unsure if Jim’s loss of power in his leg was caused by his stroke or by diabetes.

“It was so disheartening,” Roisin says, “Jim had been recovering well but this totally floored us. I had taken partial retirement and moved to part time hours, but after that I took total retirement to care for Jim.”

Slowly, Jim’s power in his leg returned and he is now able to drive and walk again. His tiredness persists, which Jim says is one of the biggest impacts on his life, as well as the loss of independence.

“It helps to be able to vent.”

But both Jim and Roisin have found the peer support at the Carers Group and Stroke Group invaluable. “Everyone says you can’t do this, can’t do that,” Jim says, “They try to do everything for me and mollycoddle me. Talking to other survivors at the group, you find that they experience the same thing.”

Roisin agrees, saying, “I did overreact after the third stroke and after Jim’s leg went; it was the fear of not knowing what’s going to happen next. I get a lot more out of the carer’s group now. I can talk to them about it, and find that they have had similar reactions and have mollycoddled their loved ones too, so you realise it’s a natural reaction.”

“Without that support, I think there would be much more friction between us, and I would be mollycoddling Jim much more,” Roisin says, “I think I’ve gotten a lot better at it.” Because of the effect on Jim’s speech, the couple also experience frustration due to miscommunications. “It helps to have that social side at the groups and be able to vent,” they agree.

“It’s great knowing you have people there.”

“Shirley keeps us updated on everything that’s going on,” Roisin says. It was through Shirley that Roisin heard about NICHS Well Checks, and after having one, she found out that she had high blood pressure. Roisin has since been to the GP and had further tests taken, and been assured that everything is okay. Roisin and Jim also take part in the NICHS Inspire Choir together. “I was initially wary as I thought it was just for survivors,” Roisin says, “But everyone was so welcoming and it’s great craic. We really enjoy going.”

When Jim lost power in his leg, the family were forced to cancel a holiday they had planned as Jim wasn’t able for the trip. “Having Shirley and the group was a good support,” Roisin says, “I knew they would understand and be there for me. It’s great knowing you have people there.” And happily, a year on from Jim losing power in his leg, they are preparing for a family holiday in the USA!