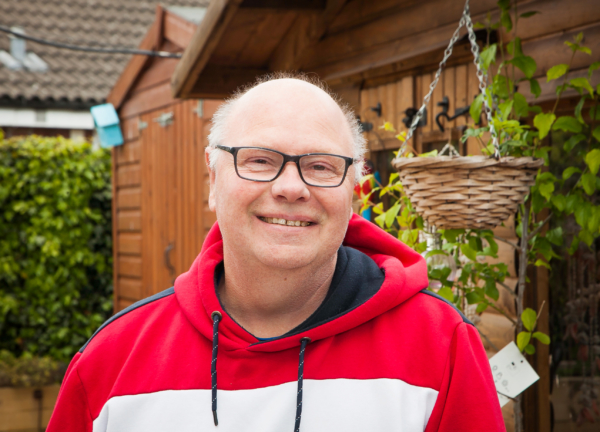 “There are the typical FAST stroke symptoms that you hear about on TV, but none of that happened to me. I was just finished painting and decorating our new bungalow, so I was gathering some stuff from the old house. I bent down to pick something up and when I stood up again, I felt dizzy and started being sick. I called the doctor and he said it was a bad case of vertigo. But as time went on, I realised it was something worse. I phoned an ambulance and as they arrived and loaded me into the ambulance, I took a small stroke. They brought me into hospital by which time I was coming out of it a bit. They kept me in overnight and the next morning after I had got myself up and brushed my teeth and washed, I went back to sleep for an hour, and when I woke up my whole right side was numb.”

“They brought me straight down for a CT scan and it turned out that the clot was very close to my brain stem. I was rushed to the Royal Hospital and there they tried to get rid of the clot using wires that they put into your veins to try and push it out [Thrombectomy] but with no success. The consultant then said to my wife, if we don’t do anything he’s going to die, and if we do something there is still a chance he could die anyway. At that, we thought the best thing to do was just let him have a go at whatever he thought might help. The consultant wasn’t sure what to do. What he did was give me clot-busting drugs [Thrombolysis] but he broke them down into three parts and gave them to me that way, which has never been done before. He said if he gave them to me in full it could have given me a bleed on the brain. So for about 48 hours it was touch and go, but luckily enough I came out of it on the right side.”

“From that day to this, I reckon my wife is worse off than me. She is my main carer. I can dress myself and wash myself and stuff like that. The only thing I can’t do is tie my own shoelaces. My stroke was bad enough but where I am at the minute, I’m able to cope with it. But she has all the meals to cook, and she has to set things up for me. All the DIY jobs around the house that I used to do, now she has to learn to do. So it is very, very hard for her. We have a caravan down at Millisle and we had a wall that needed painting. I would have been all over that kind of thing. She had never used a roller to paint or anything before, and she did a great job, but it’s so difficult to watch. At this stage of life nobody wants to start relearning stuff. “

“My right side is still quite weak, and I can’t walk far. To be honest the specialists in the hospitals said I wouldn’t walk again. So I’m doing alright that way. But trying to learn to use your left hand to do things every day when you were predominantly right handed before is difficult. You take your life in your hands every day when you’re trying to shave with your left hand!”

“One of my aims was to learn how to drive again. I had to go through the DVLA to get a different license, and then to Disability Action at Holywood Exchange. They took me out in a specially adapted car. The car has the usual accelerator on the right hand side, that you can flick up out of the way, and then one on the left side you pull down which is absolutely amazing. For me, everything is done with my left foot, and it’s an automatic car so you don’t need to worry about the clutch. Now, if you’ve ever tried braking with your left foot – I’ve nearly broke my wife’s neck so many times!”

“The car also has a steering ball that you use instead of the steering wheel, and mine has about ten different things that can be done on it – your indicators, your lights, your wipers, your horn. You just work it with your thumb. It takes a wee while to get used to, but you can do it. It gives you that independence to go out yourself, which I used to do.“

“We drive down to our caravan in Millisle, we go to Belfast sometimes – everything we did before. You have to be a bit more aware. It feels a bit challenging sometimes. Other people on the road don’t know that you have a stroke, so you worry about what other people are doing. But there’s nothing impossible about driving again. The people who are there at Disability Action will move heaven and earth to try and get you back on the road. They take you out in the car, and if there’s something that isn’t working for you, they will bring you back and put you in the simulator they have and try and find an answer and a way to make it work for you.”

Joe has been attending his local NICHS Young Stroke Group since 2018, and also completed the Taking Control Self Mangement programme.

“It has been a God send. I absolutely love it. The comradeship is brilliant. We know have all the group members in a Whatsapp group and there’s not a day that goes by that you don’t laugh at something someone has sent. We’ve learned so much about each other and it’s been such a great thing. We’re all so close to each other.”

If Joe could give one piece of advice to someone who’s just had a stroke, he says it would be, “Don’t be afraid of failure. Try things that you think you would like to do but are afraid to do. The thing is if you have a go and fail, that’s fine. There’s nothing wrong with failure. The next time you do it you’ll probably fail again. But you’ll get further on the second time than you did the first time. So in a sense, you’ve failed better.”

“No matter what you do in life, it’s never going to be right first time. It’s the same with a stroke, you learn new ways and you adapt. You learn the easiest way for you to do it. There’s no point looking at someone who is perfectly able to do things. That’s fine for them. You learn the best way for you, and even if it looks stupid, if it’s perfectly great for you.”