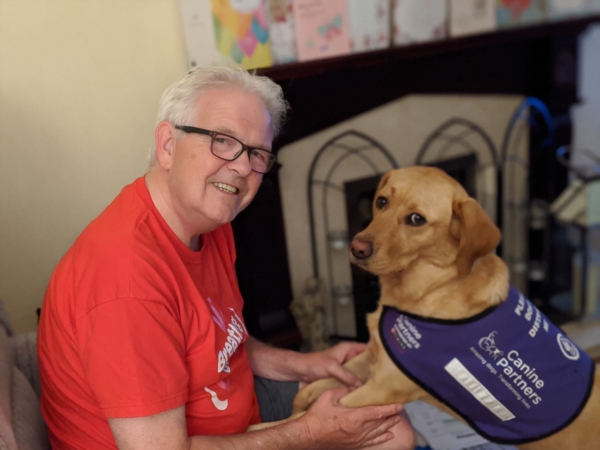 John Dempsey, 62 from Carryduff, has been involved with NICHS’s care services for over a decade. He suffered a major heart attack at 36, had a second heart attack 10 years ago and a year later, a stroke;

‘I woke up one morning and kept bumping into things and didn’t know why. I got in the car and drove to work and found I was just oblivious to everything around me. I was hitting the curbs and I knew that something wasn’t right. I phoned an ambulance, got to hospital and they confirmed I’d had a TIA [transient ischaemic attack].’

‘When I left hospital a lovely young girl from Chest Heart and Stroke came out to visit me at home. She mentioned some activities that the charity was running. At the time, I just had no interest in people. I nearly didn’t let her through the door!’

‘I went for ages not knowing what to do with myself. You are talking to someone who worked as a Civil Servant, was a volunteer for Manchester United Supporters Club (nearly a full-time job!) and drove a taxi. It was very hard to go from that, to all of sudden being locked away at home. It was frightening how easy it was to give up. Had I not let Shirley from NICHS through the door, I don’t know whether I would have ever recovered.’

John took part in our self-management programme to help with his symptoms and also joined our drama group;

'What I learnt then still sits with me today. I wouldn’t know how to cope if it wasn’t for that course. The charity has helped me for years.'

Encouraged by his positive experiences, he signed up to Inspire Choir;

‘Although the Inspire Choir is about breathing, because I’m on the NICHS books, they reached out to me. When I first joined I couldn’t hold a note for more than 23 seconds, now I’m close to 70! That’s the difference that the Inspire Choir has made for me!’

‘As well as that, I get to see the same faces every week. It’s very relaxing and comforting to know that you have people around you who have suffered the same problems. You pick things up about your health, remedies, what other people have found useful.’

‘I would absolutely recommend it – whether you can sing or not!’

About our Inspire Choir

We established the ‘Inspire Choir’ in 2018. The choir began as a 10-week pilot to determine what positive effects singing could have on patients with long-term respiratory conditions but 3 years on, it is bigger and better than ever!

During lockdown, concerned about the mental and physical effects that shielding was having on our service users, we moved the choir online, doubled the rehearsals, and opened it up to all clients.

Pauline Millar, Head of Respiratory at NICHS, says; ‘The results of the original pilot were nothing short of inspiring. After just 10 weeks, 72% of choristers tested found that their speech had improved and 67% noted a boost in their mental health. Not only that, we saw considerable improvements in the group’s sleeping, anxiety levels, chest tightness and ability to walk.’

‘As well as improving lung function, we saw such social and mental health improvement. We knew then that the choir could provide a lifeline of support for our patients in lockdown.’

Pauline says; ‘The improvement in some of our patients has been incredible. They have gone from being extremely breathless, depressed and lonely to coming along to choir with the biggest smiles on their faces.’

Find out more about our care services here.