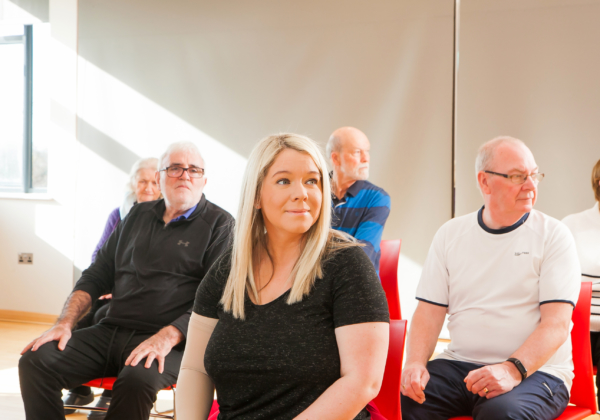 “I was working away, a mum, perfectly healthy, and then boom - a stroke out of the blue.”

Jolene McAdam from Armagh was an ordinary, busy mum to three kids under seven when life as she knew it was turned upside down by a sudden stroke, aged just 34.

“I’ll never forget that day,” Jolene recalls, “It was 26th of May 2021. I was in the car travelling home from Portrush when I began to feel very sick and started vomiting. I thought nothing of it at first, but then all of a sudden, I saw a big white flash, like a camera going off, and I couldn’t see.”

“I thought it would pass in a minute because I would have been prone to visual migraines, but after a few minutes it didn’t go away and I started to really panic. We pulled up to the nearest doctors and when the doctor came out to the car, I could only see half of her.”

“The doctor said I could be having a type of migraine that mimics a stroke, or it could be a full blown stroke. She advised me to go to hospital, so we called an ambulance.”

Once the ambulance arrived, it became even more apparent something was very wrong with Jolene. “When the paramedics came they had to put me on a stretcher because I couldn’t walk. By this stage, I couldn’t move my whole right side. I started finding it difficult to communicate. In the ambulance, the paramedic was asking me questions and it came to a stage where I just shook my head at him. I couldn’t even think or understand. I remember him asking me my name and I told him my maiden name - I knew that wasn’t right, but I couldn’t remember what my name was.”

Jolene was brought to Antrim Hospital and began tests to find out what was wrong. “The doctors were assessing me, showing me pictures and seeing how much I could see. At this point my whole right side was completely gone. I remember looking down the bed and my arm was just hanging off the bed and I couldn’t move it. I couldn’t communicate - they were talking to me and all I could do was either nod or shake my head.”

“I was thinking, if this is a visual migraine this is horrendous and felt a bit embarrassed that I was in such a bad way. But then I was taken into another ward and I remember this woman coming up to me and saying ‘Jolene, you’ve had a stroke’. I just felt like her face, everything, just zoned out. It was a total shock.”

“I was terrified thinking I was going to be left not being able to do things for myself. I am so glad that I have progressed, and I am starting to do more for myself.”

“It took me a long time to accept what had happened. For me it was the wee things you lost independence in. I remember being asked if I wanted a bib to eat because I was spilling my food, and I thought, ‘No, I don’t want one, I don’t need one!’ I was determined and I wouldn’t accept that I had lost my independence - I was always pushing saying ‘I can do this myself’. I really wanted my independence back.”

When she was discharged from hospital, Jolene returned to a very different life than the one she had left behind that day. “It affected everything,” she says, “There’s not an area of my life that it didn’t affect. Being able to do things for myself, getting out and about, socialising. At the start, I couldn’t even have a conversation with anyone. When I came home, I could only see half the TV screen and I would have to turn my whole head to watch it. I couldn’t even tolerate the noise of the TV.”

“Everything was exhausting. I needed help with everything - cooking, cleaning, looking after the kids. My youngest, Kaiden, was only one and a half and I couldn’t change his nappy, I couldn’t even lift him to carry him or bath him.”

“Back then, after getting up and getting dressed, I was ready for bed again. Looking back now, I’ve come a long way from that.”

“Now it’s been about nine months since my stroke and I still have vision loss - I lost my peripheral vision in the right side of my eye. I also have numbness in my mouth and my tongue, and a slight right sided weakness. I was also diagnosed with Holmes Tremor after my stroke, which makes things really difficult.”

“It’s also very frustrating because people don’t understand, they think as nine months has passed I must be better, and to look at me I look fine. You can’t see the difficulties beneath the surface.”

Jolene was first contacted by Northern Ireland Chest Heart and Stroke’s Stroke Team during the pandemic, and took part in their online PREP Education Programme and outdoor Stroke Walking Group. Now, as COVID-19 restrictions have eased, Jolene was invited to come along to one of the first PREP programmes in Lurgan as it returned to face-to-face delivery.

Jolene says, “Getting out to the group is brilliant - otherwise my life would just consist of being in the house, looking after the kids. It’s really hard to get out and about and socialise since my stroke. I can’t drive and I live in a rural area, plus with my fatigue, I’m not able to do a lot of things. For example, if my friends are meeting up to go to the gym, I’m not fit to do that like I used to. With the group, it’s the emotional support of having people who have been through it and totally understand which is so important. It was brilliant to meet the other girls and see that you’re not alone – we’re all young mums, going through the same thing.”

As a young woman as well as a mum, the concerns of every life have completely changed for Jolene. She says, “When someone suggested going somewhere before my stroke, your worries would have been, have I got something to wear? I wonder am I off work? Now I think, can I go there, would I be fit to do that? Would I have enough energy, would I have to walk far? I was invited to a wedding recently and I was thinking, what kind of shoes will I wear, because I can’t wear high heels anymore. How will I get my hair done, my makeup done? I can’t do those things the way I used to. For someone like me who is young, you want to be able to go out and feel nice. Even shopping for an outfit is a total chore – I need a seat in a dressing room because my balance isn’t great, and even the energy to walk around the shops- I’m just not fit for it. Before, I would have been the type of girl to jump in the car and go up to Belfast shopping, I would have been queuing in Primark! But all that has changed.”

However, with the support of the PREP group, Jolene is determined to keep recovering. “I’m still not driving and that’s the next big thing for me, and I would love to get back to work. I hate saying life is hard, because that’s so negative. Life has changed, but it’s about looking at the things I can do.”

Almost 90% of our care, prevention, research and campaigning work is funded exclusively by donations.