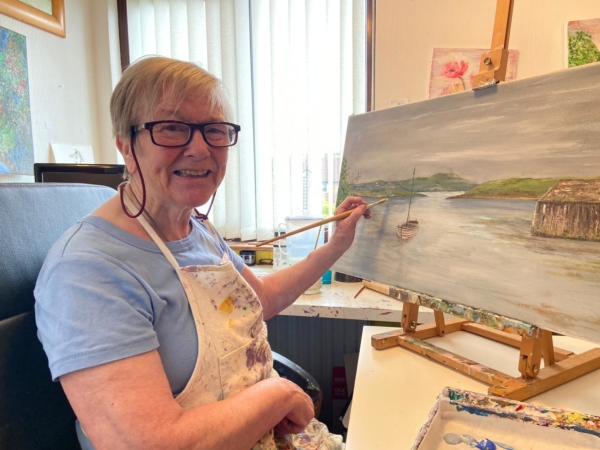 Northern Ireland Chest Heart & Stroke has cared for and supported stroke survivors since 1976; survivors like Tina Gault, who suffered her stroke twenty years ago.

Tina had just returned from holiday in Tunisia with husband Stewart, when she suffered a mild stroke. When admitted to hospital, she had her second stroke, the one that would change her life. Only 54 at the time, Tina went from a sociable, active individual looking forward to a well-deserved retirement, to paralysed on the right side and hospitalised for several months having completely lost her power of speech.

While in hospital, Tina was visited by a member of the NICHS Stroke Team who encouraged her to join the charity’s Stroke Support Group in her local area. “At the start, I was in a wheelchair and unable to communicate. It was incredibly frustrating, especially not being able to talk. I did do Speech and Language therapy, but after a while, they realised that it was as good as it was going to get. But a lot has happened since then.”

Tina took part in Art Therapy at her NICHS Stroke Support Group; “Art has restored some of the hope that the stroke destroyed. Art therapy may not sound very important to someone who has not had a stroke, but I am proof that it can change your life. A volunteer at my local stroke support group, John McCroskey, spent painstaking hours teaching me – and others – how to apply paint to canvas. But he was teaching us more than simply how to paint. He was helping us to get back some of what our strokes had stolen from us.” Painting, and her Support Group, gave Tina a new lease for life, when everything felt hopeless; “I don’t use my wheelchair indoors now and although I haven’t regained my speech, I have learned to write and paint with my unaffected left hand. Without Northern Ireland Chest Heart & Stroke, and the people who donate to it, I might never have regained what I have.”

Daughter Debbie, who cares for her mum, especially since Stewart’s untimely death 6 years ago, is in awe of Tina’s can-do attitude; “Mum just doesn’t let life beat her. She is so independent. She does her own ironing, dries her own hair, changes the bed, all with just one hand! She was a trained chef and still cooks far better than me, even one-handed. She is so looking forward to getting back to her NICHS group.”

Tina adds; “I hope people will also see me as an example of how – with help – there is life after stroke.” For more information on NICHS stroke services, click here.