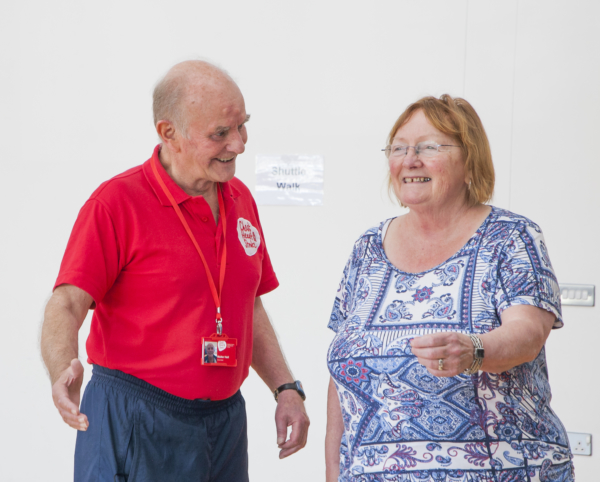 “Every week I feel like I have done something useful. I know that I am helping people.’”

Established in Belfast in 1946 by 16 visionary volunteers, the very foundations of NICHS were cemented by proactive individuals giving their time for free. Since then, volunteers have been fundamental to the ongoing success of the organisation.

One volunteer who had made an incredible contribution to the charity for over 5 years is Thomas Hall (better known as Walter), 75 from Belfast.

Walter has been volunteering for NICHS since his own stroke in 2016. A Lecturer at Ulster University and an active individual who played and coached tennis, Walter used to exercise 2-3 times per week. His stroke was entirely unexpected;

‘My stroke came on gradually over the course of a week, rather than being sudden. Eventually my arm was paralysed. It certainly didn’t follow the usual FAST symptoms! It was hard to pinpoint the exact reason for my stroke, but I have come to accept the situation.’

NICHS contacted Walter immediately after his stroke and engaged him in its 6-week PREP (Post-Rehabilitation Exercise Programme) to help with his physical mobility.

Walter says; ‘I did 6 weeks, then another 6 weeks and was then invited to volunteer. I had enjoyed the classes so much and found them so useful that I was happy to do so to help other people.’

With a background in exercise and teaching, Walter found that he could adapt his skills to assist in the classes;

‘The physio is the professional in charge of PREP but they are one person in a group of 12, all with different disabilities, and can’t be with them all. That’s where us volunteers step in.’

‘It’s so rewarding to be able to help people who are in a similar position to yourself, or even some who are slightly worse off. I can give them the benefit of my own experience of coping with my problems. We can work together on a positive outcome and physical improvements.’


Walter’s mobility has improved from his ongoing contribution to the classes, but he was surprised by how much his volunteering has benefitted his mental health;

‘After a stroke you tend to become isolated. You don’t go out as much or socialise like you used to. The PREP classes were sometimes the only time I would go out during the week. Every week I feel like I have done something good. My work is not essential, but it is useful. I am helping people.’


Catherine Murnin, Head of Care Services at NICHS, says; ‘Walter would describe his role as non-essential, but I would disagree. Without our volunteers, we simply couldn’t support our clients in the way that we do. They are an incredibly diverse group of people, who all join us for different reasons. But, what they do have in common, is that they are making an enormous difference to our clients who are living with chest, heart and stroke disease. This week especially, we recognise their efforts and wholeheartedly thank them.’

Walter is looking forward to getting back to his volunteering routine;

‘Since the pandemic started, I haven’t wanted to take any risks when it comes to COVID. I’ve noticed that I’m getting less exercise than before and I’m stiffer than I used to be. I can’t wait to get back to volunteering at PREP.’