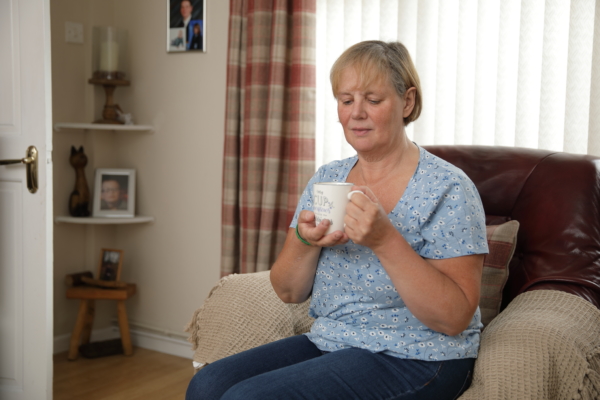 The day I had my stroke, 16th Oct 2018, I woke up and felt that I couldn’t move. I realised the problem was on my left-hand side – I couldn’t move my arm. I tried to shout for my husband Bertie, but there were no words. It was just noise.

I tried to sit on the edge of the bed, but when Bertie eventually came in, I was lying on the floor. By the time the ambulance arrived, my speech was starting to return slightly.

When I was recovering in hospital, I didn’t know what was to become of me. Bertie had had a stroke five years earlier. Would we be able to stay in our home together when we both had a disability? Would we be like two people with only one fully functioning body between us?

A short time later, NI Chest Heart & Stroke came into my life. After Christmas 2018 I did two 6-week sessions of its PREP programme (post rehab exercise programme). For the first time I was among a group of people trying to do the same thing as I was – as I saw it, we were all trying to put ourselves back together.

It was great to meet other people in the same position. Everybody had their own ways of coping – if somebody had tried something that made life easier, they would share it with the rest of the group. Maybe it was something you hadn’t thought of yourself.

When lockdown started this year, I was worried about what would happen when we could no longer meet. But Beth, who runs the group, was on the phone immediately. Chest Heart & Stroke weren’t stopping anything. We started a Zoom group so we could continue to get together, and Beth started sending out little newsletters to keep our spirits up. We also shared poppy seeds by post, and we’re all growing yellow poppies. That may seem small, but it’s not. The ability to keep in touch has been brilliant. Chest Heart & Stroke is right up there with the best things that have happened to me since having my stroke. It’s been so good I wish Bertie had availed of it more when he had his in 2013.

I have mostly recovered now. I still have trouble with words and get letters the wrong way around if I’m writing. If I text you on the phone it’s a bit of a mess! But mostly I’m okay. I care for my mother, who’s in her 80s, so I do her grocery shopping and each day I go to her house and help her make the dinner.

I’ve learned a lot about life during the course of the last seven years and the effect of two strokes in a household. One of the most important is that we all depend on each other. We all need help at one time or another, but at times we’ll be able to offer support to others.”

There are so many ways to help us keeping caring through COVID - whether it's by sharing your story so we can help raise awareness of what’s important, or through a simple donation. For more information on our work and how we’re still caring through COVID, click here.