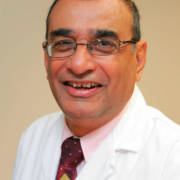 
Professor Mahendra Varma OBE was a Consultant Cardiologist at the Erne Hospital in Enniskillen since 1981, up until his retirement.

Since 1984 he has been Chairman of the Fermanagh support branch of NICHS and has been a member of the Council of NICHS since 1985.

He has been Chairman of the Medical Staff Committee at the Erne Hospital (now South West Acute Hospital) for many years. He is a former President of the Irish Cardiac Society.

Prof Varma was recently honoured with an OBE in the Queen’s birthday honours list.